The Ramirez Labels of our handmade and studio guitars 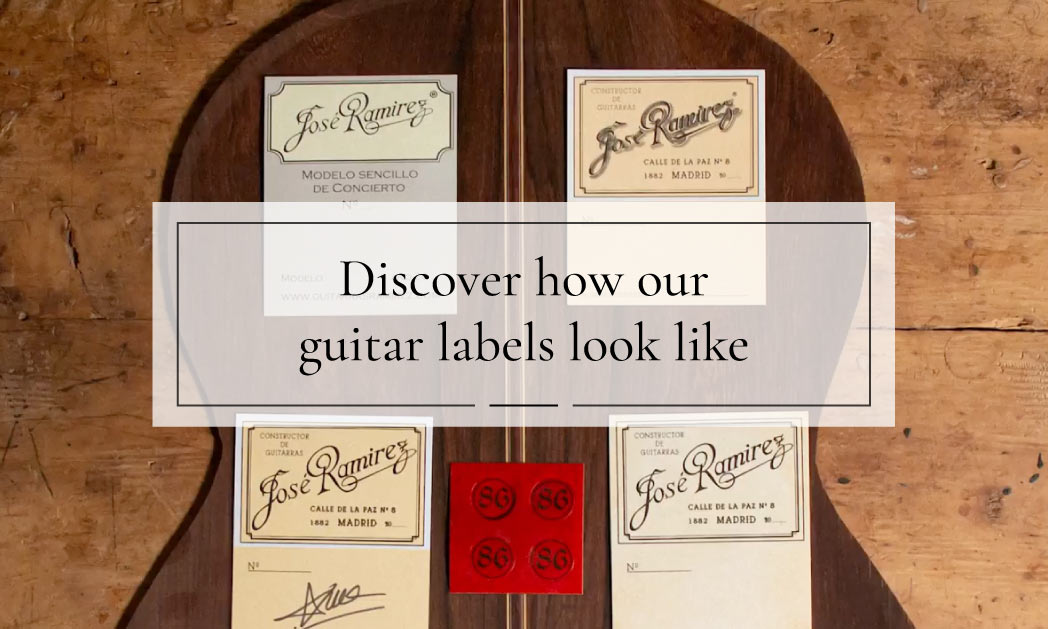 Today we are going to talk about the labels of the guitars handmade in our workshop, our Ramírez Labels. Until 1967 there was no real control of the labels, therefore, the dates will be approximate and surely there are some labels that are not reflected in this compilation, although most of them are probably there, therefore, if you do not find them you should contact us, as there are also many forgeries. The labels made in the workshop were signed from 1967 onwards, although in 1945 José Ramírez III, in his first stage as a builder, signed his labels (the signature is far from the one he finally used).

Get to know the different Ramirez labels of our handmade guitars

Firstly, we find the label of the Sencillo de Concierto model. It is the simplest guitar, as it has less ornamentation, and less elaboration and therefore it has the name Sencillo. 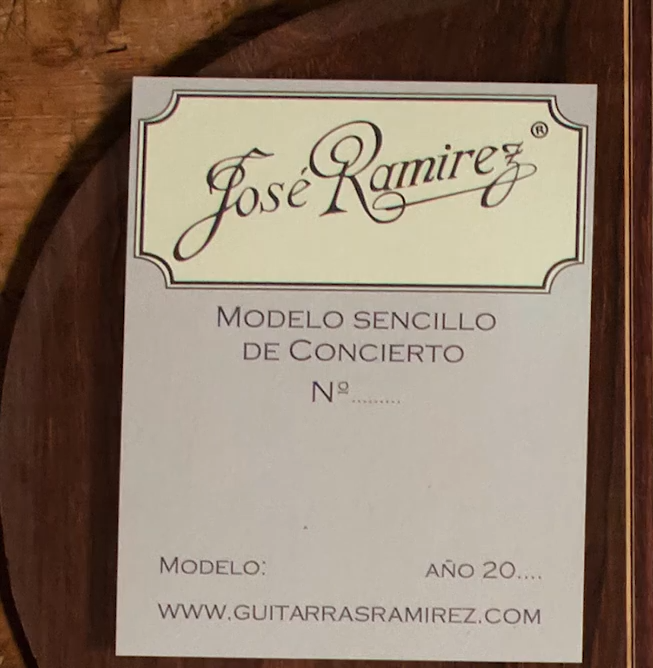 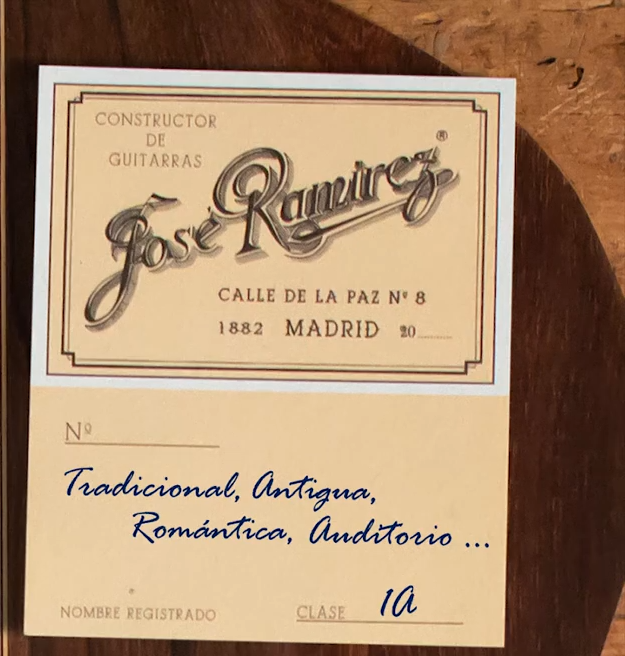 Then we found these two Ramírez labels, which we will explain at the same time since the Centenario label was initially made to commemorate the centenary of our workshop, which is why it was called the Centenario Model.

This model was so popular with guitarists that many wanted something similar, but not quite at that level. Thus, an intermediate guitar between the Tradicional and the Centenario was created, the Élite.

In addition, this label bears the signature of Amalia Ramírez, the workshop’s current teacher. 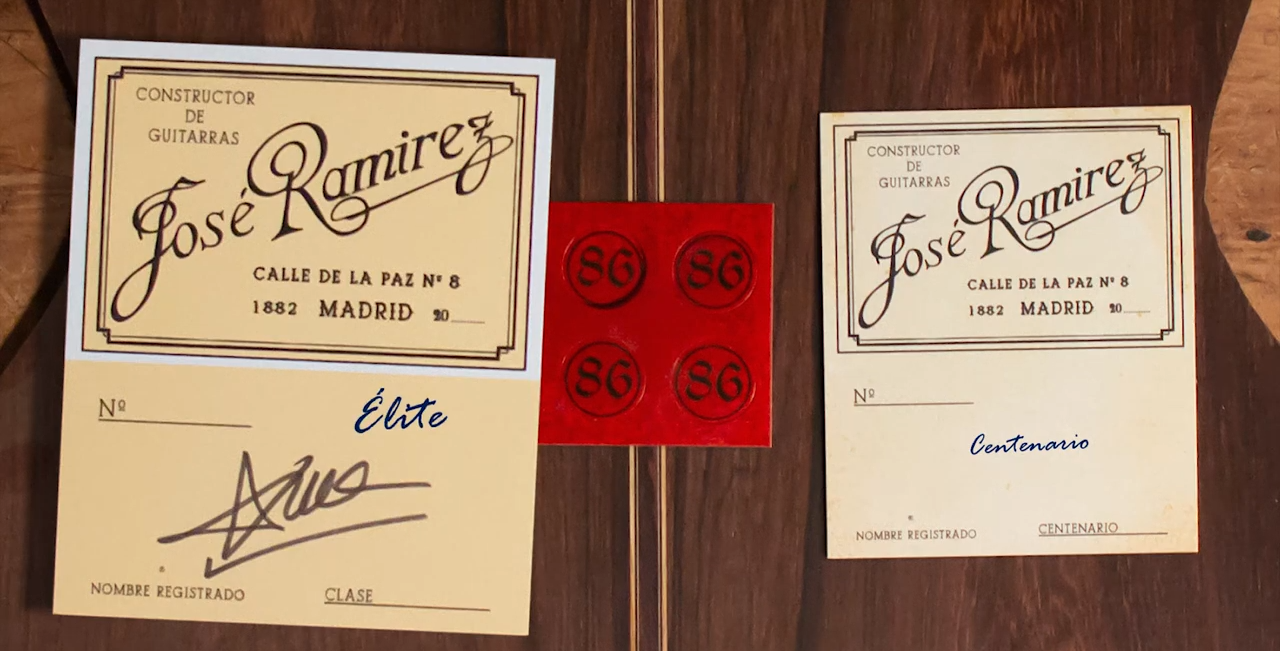 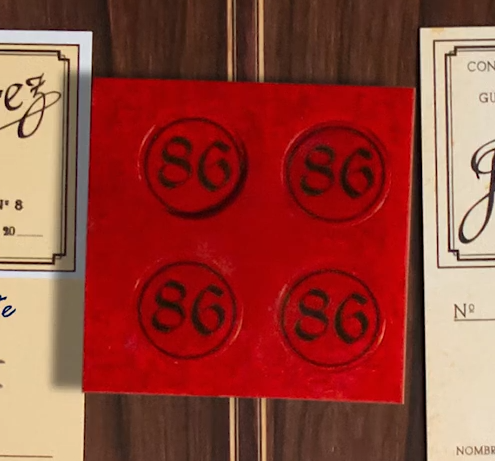 Then we have the reissue of a guitar that is in the Metropolitan Museum in New York that belonged to Andrés Segovia and was built by Manuel Ramírez.

In 2001 we went to the museum, took measurements and checked the instrument to make a copy. This is how we made this label, recalling Manuel Ramírez’s labels of that time. 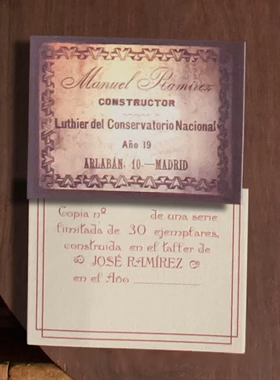 This Ramírez label, like the previous ones, commemorates another of our anniversaries, the 125th anniversary of the history of our house. It shows almost all the generations, except Cristina and Enrique Ramírez, who were still very young. 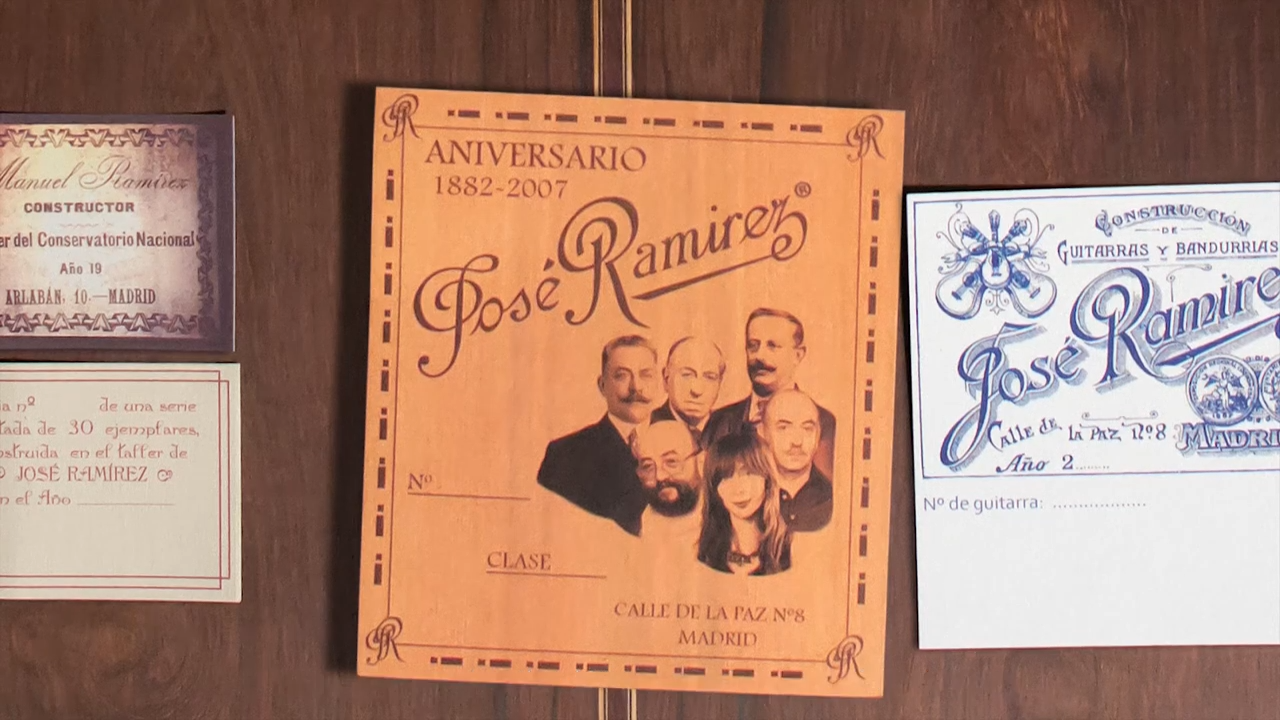 Finally, we have this label that reminds us of the old Jose Ramirez I and II labels. Moreover, we are reissuing them because we are revisiting all the guitars that the old generations started to make.

A detail of this label is that in the past it was without the lower part and there was only the box. But, from the 1960s onwards, we started to sign all the guitars, which means that they are checked by the workshop’s master guitar maker. For example, now they are signed by Amalia Ramírez, the current master of the workshop.

We used this label with the new model we launched last year, Mangoré, based on the guitar that belonged to Agustín Barrios Mangoré and which is on display in the Cabildo of Paraguay. He dropped his guitar in the river and continued to play it afterwards, making it a mythical instrument in the guitar world.

Agustín Barrios was one of the great composers and musicians of the Spanish guitar. 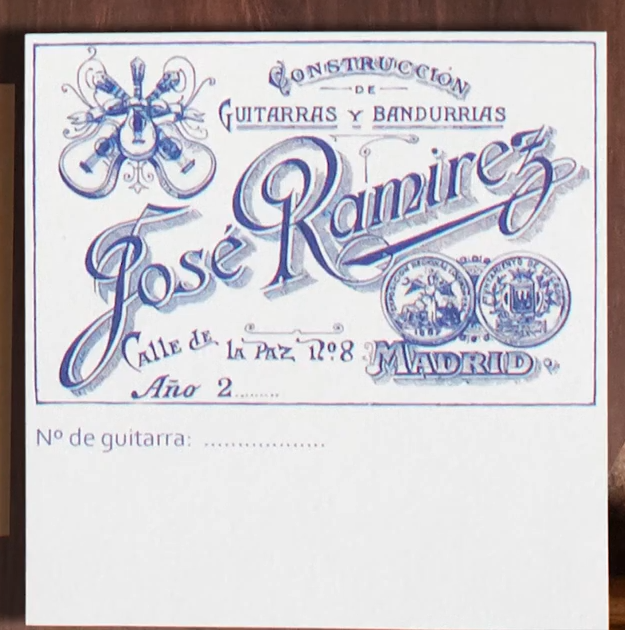 Ramirez labels on our studio guitars

Next, we are going to talk about the Ramirez labels for our export studio guitars. We have 2 kinds, one the studio label of the N, NE or the R line, and then what we call the commemorative guitar, which is the 125, the 130 and, currently, the Tiempo guitar.

Before, the label we used for the E, NE and R lines is the one with the orange borders. But we completely changed the line and made a new one based on the E line. We revised sizes, and measurements and launched an improved line from the previous ones. 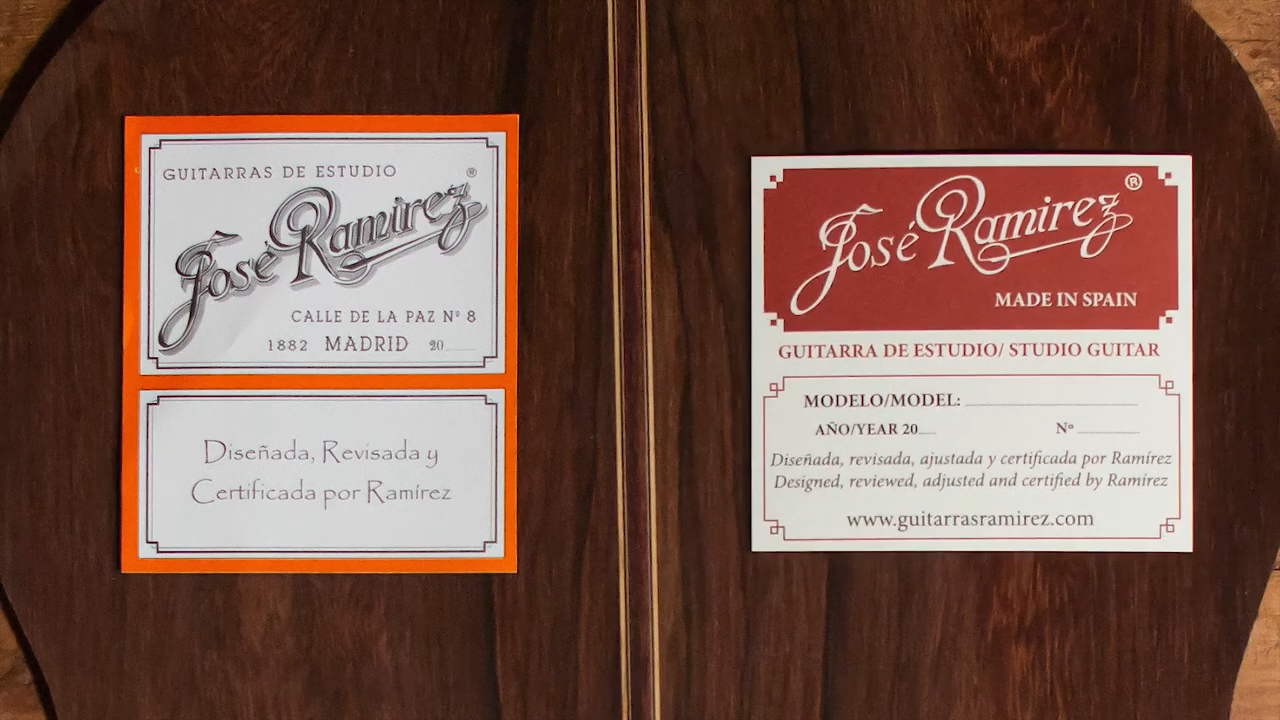 These labels are for commemorative models. We have the label that was designed for the 125 guitars, which was only made for 5 years.

After those 5 years, the label for the 130th-anniversary guitar was made, which had the same time limit. After that, we thought, in order not to limit the commemorative series to 5 years, we would create the Tiempo guitar. 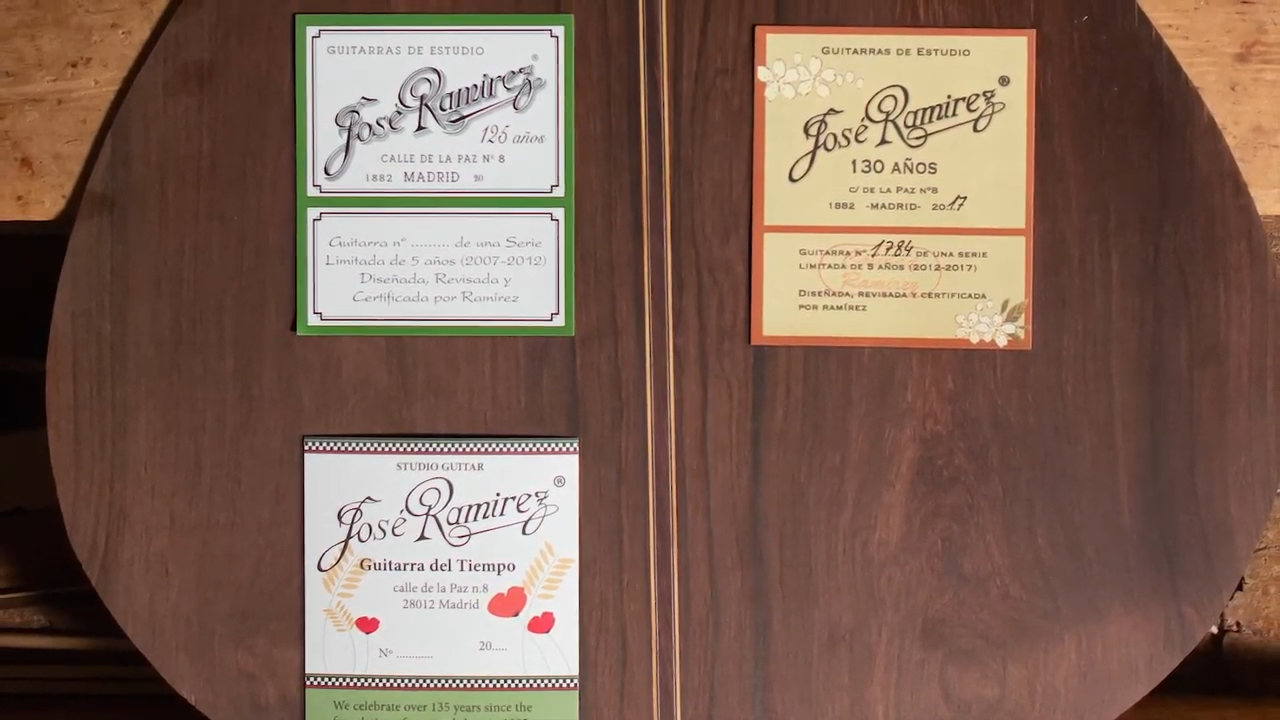 Behind these labels, we find those designed for guitars sold exclusively in shops.

First of all, we have the label of very simple and economical guitars. They are guitars that have our design and are designed for people who want to get started in the world of the guitar. These are not exported abroad and are sold exclusively in our shop. 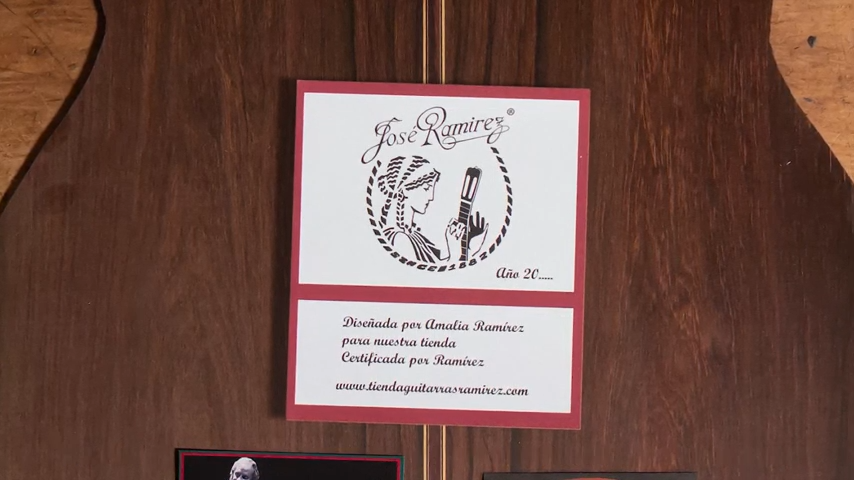 Preludio guitar is handmade, very simple and has a Torres type bracing, which would correspond more to the 19th century and does not have much aesthetic work. 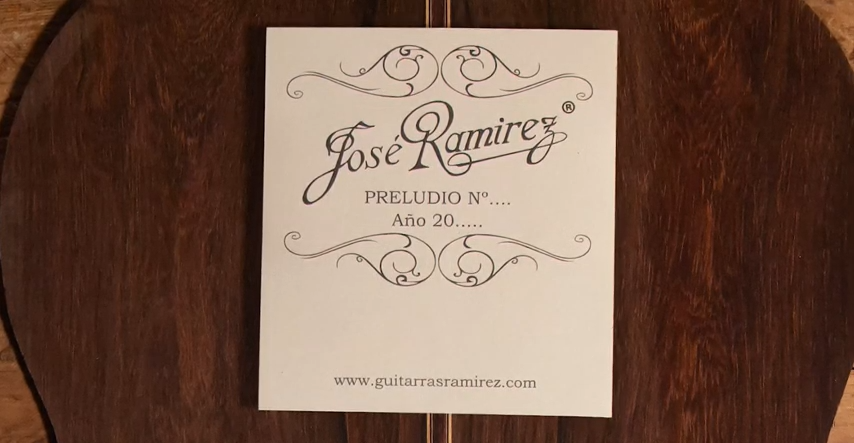 Then we have the Serranito model which is mainly focused on the flamenco market, where most of the flamenco guitarists are in Spain.

It is a guitar that pays tribute to one of the main flamenco guitarists in history, Víctor Monge Serranito, one of the people who revolutionised flamenco along with other great names. This model has our template and our design. It is a solid guitar that works and is well liked. 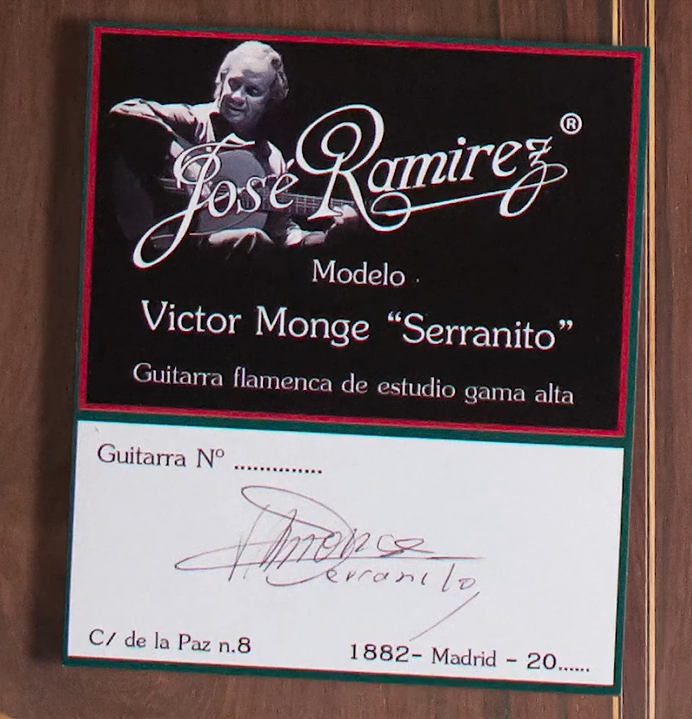 On the other hand, we have the Vino series which is also flamenco and much simpler than the Serranito guitar. The design pays homage to another of the Spanish symbols, which is the production of wine. For us, the guitar and wine have many things in common, both the ageing and the delicacy when it comes to the treatment, the designs… 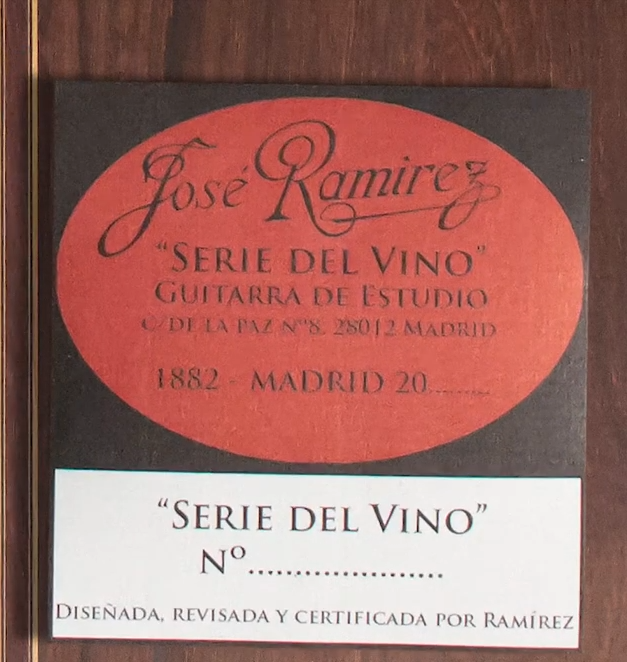 With these labels, there is often a lot of confusion. The first thing you should know is that the guitars with these labels are not Ramírez. They are guitars that we selected, among several Spanish factories, which are very economical.

They are designed for people who want to start in the world of the guitar, but the most important thing about them is that they are only sold in our physical shop in Madrid.

The origin of this label is the result of a situation that José Ramírez II was going through. He sold guitars that were not his own, cheaper ones, to people who were beginning to play the guitar. These, moreover, were also sold in other establishments in Madrid, so the problem arose when certain people tried to claim a guarantee from him when the instrument had been bought in another shop.

So, fed up with this situation, to make sure that the guitar had been bought in his workshop, he started to include these labels on the guitars, so that he knew that he had checked them and that they had been sold there.

After this, it became a tradition to include such labels on guitars that are not made by us, because this way we guarantee that they have been adjusted and checked in our workshop.

We also have 3 kinds of labels. The first one is the round one, which is what we call Rondalla instruments, which are very simple and a bit better. This was followed by the blue-bordered label and finally, we unified everything under one label to avoid confusion. 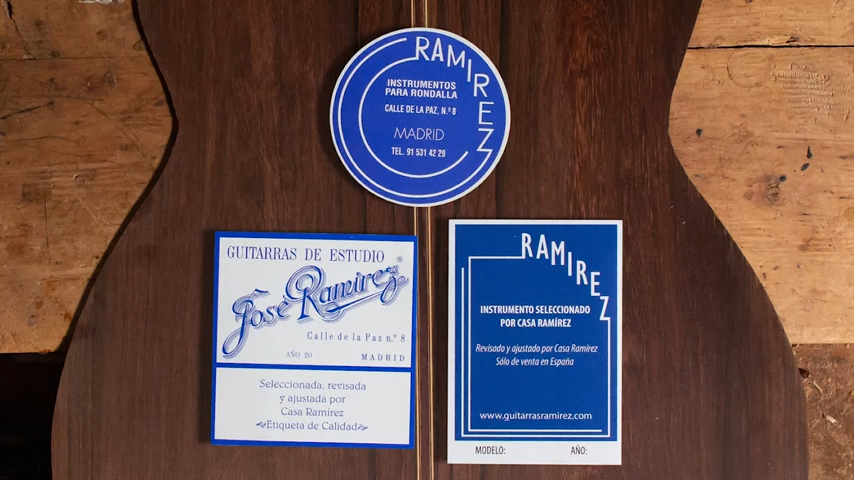 The importance of Ramirez Labels

The most important thing about the Ramirez labels is that they are like the guitars’ identity cards. They have a number that we register and they also indicate the type of guitar. No guitar leaves our workshop without its corresponding label.

One of the things it guarantees is that the guitar has left our workshop and has passed our quality control as well as our requirements.

If you prefer to watch the video about the labels instead of reading the article, we leave here Cristina and Enrique talking about them: