What are Ramírez handmade guitars? 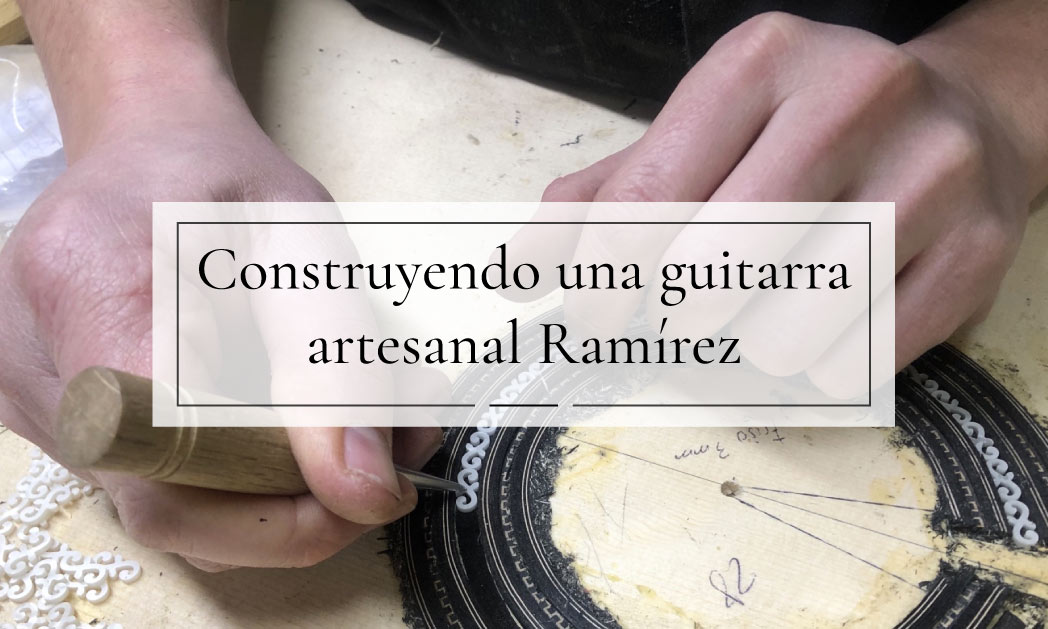 If we take into account the meaning of craftsmanship as the “art and technique of making or elaborating objects or products by hand, with simple apparatus and in a traditional way”, we are talking about very different concepts to objects made in series, as is done in factories, using machines and automated processes. So to talk now about purely handmade guitars is to enter another world. It’s neither better nor worse, it’s different, they are aimed at a different audience.

Handmade guitars are guitars that, from start to finish, are made by hand, one by one; well, our traditional way of building is to make four guitars at a time. This is because, in many of the operations, once we have finished gluing the last one, we can take the first one, which will already be dry, and so we complete the cycle. Of course there are operations that need a whole day to dry, but that is only in some of the construction steps.

How do we work with handmade guitars at Ramírez Guitars?

There is a special care and attention that we take when working with each guitar, even in something as seemingly simple as sanding.

When I started building handmade guitars, my father used to tell me that I had to sand the wood until it smelled of garlic. And I sanded and sanded, but it never smelled of garlic, of course (which is the innocence of youth).

I finally understood that you had to sand to the point where a fly could skate on that wood. Which is another way of saying that it had to be sanded down to the impossible. Inside and out.

The truth is that in each step of the construction of each of our handmade guitars we recreate ourselves. Sometimes, when we are working and there is a knot in the wood, for example, that was not visible before the slashing, we discard that wood and start again, although there is a lot to talk about discarding wood, and I am going to dedicate a chapter to this subject, which deserves it.

In any case, what I want to reflect here is that we do not take for granted anything that is not really good, and if we have to start over or repeat an operation from the beginning, we do so. Fortunately, it is very rare for something like that to happen when the process is so careful and precise.

The types of Ramirez handmade guitars

As far as I know, both my great-grandfather José Ramírez I, his younger brother Manuel Ramírez, and my grandfather, José Ramírez II, had several types of handmade guitars, made in their workshops, of different qualities, both in the selection of woods and in their construction, ranging from the simplest to the most ornate. The simplest guitars made with materials of inferior quality were what we could consider as studio guitars, but of a high standard as such, superior to those made in factories and sold in their establishments.

In the workshop of my father, José Ramírez III, the 1st class guitars, known as the 1A guitars, were made. And 2nd class guitars were also made, whose construction, however, was the same as the 1st class guitars, but which had either been made by journeymen in training, although they met all my father’s requirements in terms of quality, or had been made by first class journeymen with wood whose appearance was dull or unattractive, but which were still of first class quality, although they were labelled as second class.

How long does it take to build a Ramirez handmade guitar?

In terms of the time it takes to build one of our handmade guitars, from the preparation of the material, through the assembly, the varnishing and the final adjustment of each task of 4 guitars, it takes us about 4 months to finish it.

All this has repercussions on their sound, that’s why I always say that guitars have soul, a bit of our soul that we transmit to them, and a bit of their own, which is also provided by the woods, that living material that gives them structure, and a bit of magic as well.

And so, each one has its own personality, its own sound characteristics, its own colours, its own timbre, even if its sisters were built at the same time and with the same materials. Of course, each workshop also has its own soul, that is to say, there is a common background to all the guitars built in it. Thus, our guitars have, for example, a characteristic timbre, although the sound of each one is different, sweeter, darker, brighter… but with the same timbre.

Professional guitarists, as well as many amateurs who are looking for quality in sound and construction, look for the guitars that best suit their playing style, their touch and their tastes among handmade guitars. And this is very important, because it will be their companion on the road in which the guitarist will imprint his way of feeling the music, his touch, his attack, his sense of colour, and so the soul of the guitar is enriched by the musician who chooses it.

Contact us if you want to know more about our models and want to compare them. We can show you online to clarify your doubts and help you select the best instrument for you. You can make an appointment online, write to us at tienda@guitarrasramirez.com or call us on +34 680 122 262 to ask your questions or make an appointment.