Spruce or cedar top guitars: We tell you the differences 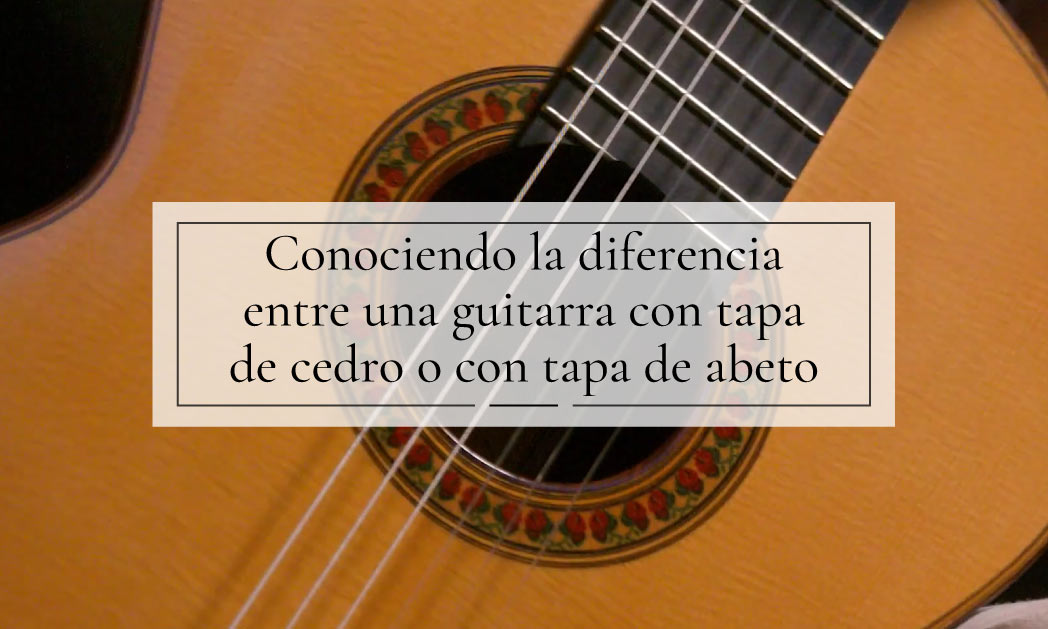 In this article, Cristina Ramírez and Adrián Baratech will tell us the differences between a spruce or cedar top guitar. Do you want to discover them? Keep reading 😉

What is the difference between a guitar with a cedar top and one with a spruce top?

For this purpose, we have selected a model of our Ramírez handcrafted guitars, the Traditional model, with these two top kinds of wood to check the differences between one and the other.

In addition, in the Traditional model with a cedar top, the backs, and sides are made of Brazilian rosewood and in the spruce top model, they are made of Indian rosewood.

The difference in sound between cedar and spruce tops

As a rule, the difference between the cedar and spruce top is that the latter is much brighter. It has a sweet sound, but a much brighter, sharper sound.

Meanwhile, the cedar top guitar has a deeper, rounder sound, which is also sweet but has a different nuance.

The most important part of a guitar is indeed the top, which is what gives it its sound, but that does not mean that the sides and back do not play a part in the sound.

Sides and back of the guitar with cedar or spruce top

The sides and the back of the handmade guitar, what they will do is to give nuances.

On the one hand, Indian rosewood is a more stable wood, a wood that will give more depth. In the Traditional model, it is the cypress of the inner rim that will give the guitar its brightness.

On the other hand, the Brazilian rosewood will give the guitar a crystalline sound without losing the depth typical of rosewoods.

Differences between the development of spruce and cedar wood

The Ramírez artisan guitar with a spruce top is older because the spruce takes longer to evolve and needs more time to reach the sound that it will reach its fullness.

Cedar, on the other hand, is a wood that from the beginning will give you almost all the sound that it will keep for life. It is true that it will evolve, but not that much.

Differences in the traditional guitar

Finally, the Traditional guitar with a top has a 650 mm or a 664 mm neck, regardless of the top you choose.

The 664 mm throw will always give more projection, but obviously, you can’t sacrifice comfort for projection. Therefore, it makes sense for the guitarist to find a balance between the two.

Testing the Traditional guitar with cedar top and with spruce top

Adrián tells us that guitarists notice a lot of difference, especially at the top. Everything else indeed influences the sound, but when you choose a top you are looking for a specific sonority.

For example, if you’re looking for a sound that projects a lot and is incisive, it’s usually a spruce top guitar because it gives a sharper, brighter sound that feels like it reaches further.

And it doesn’t necessarily have to lose the sweetness of the sound, as well as the number of timbres that can be extracted from it.

In fact, on the Traditional guitar, it can even sound almost cedar-like when it is spruce because of the velvety, rounder, warmer and more enveloping sound that the Traditional model projects, which is not usually the characteristic one would expect from spruce, yet it has that too.

Cristina Ramírez points out that the construction of the guitar also has a great influence. Depending on it, it will give one sound or another.

Adrián Baratech comments that from a guitarist’s point of view, what they are looking for is an immediate sound, a variety of sounds and timbres, and a very rich sound.

Furthermore, he points out that in the case of the traditional spruce top guitar, it has many harmonics that last for a very long sustain and that it is very balanced between bass and treble.

Adrian also tells us that spruce top guitars are often quite balanced, they tend to have powerful basses and trebles and rarely the opposite is true.

Cedar, the characteristic it has, is that it is a very round, warm and velvety sound, in general, without the guitarists having to do anything to get that kind of sound. You don’t have to change the angle of attack to make it round and full-bodied.

Adrian says that guitarists often think that cedar has less projection than spruce and, in reality, this is not the case either. It depends on many factors.

In terms of sound, it is less incisive but fuller. Spruce has sharper connotations, and cedar’s rounder, darker sound may give the impression of less projection, although this is not the case.

Other factors that influence the sound are the type of varnish used, the shot, the construction, etc. In terms of sound quantity, cedar and spruce have the same projection.

As for the number of harmonics, it has more to do with how the guitar is built, not just the top. That is to say, the construction of the handcrafted guitar is what is going to give that kind of characteristic.

Adrián Baratech tells us that what he noticed when he tried the Traditional guitar with a cedar top with Brazilian rosewood is the stability it gave him and how easy it is to get the voices out of the guitar because it is very homogeneous in sound.

What Brazilian rosewood brings to the guitar is that crystalline sound, that differentiation of each of the notes.

Would you prefer to see the differences on video?