The phonographic cylinders of Luis and Simón Ramírez 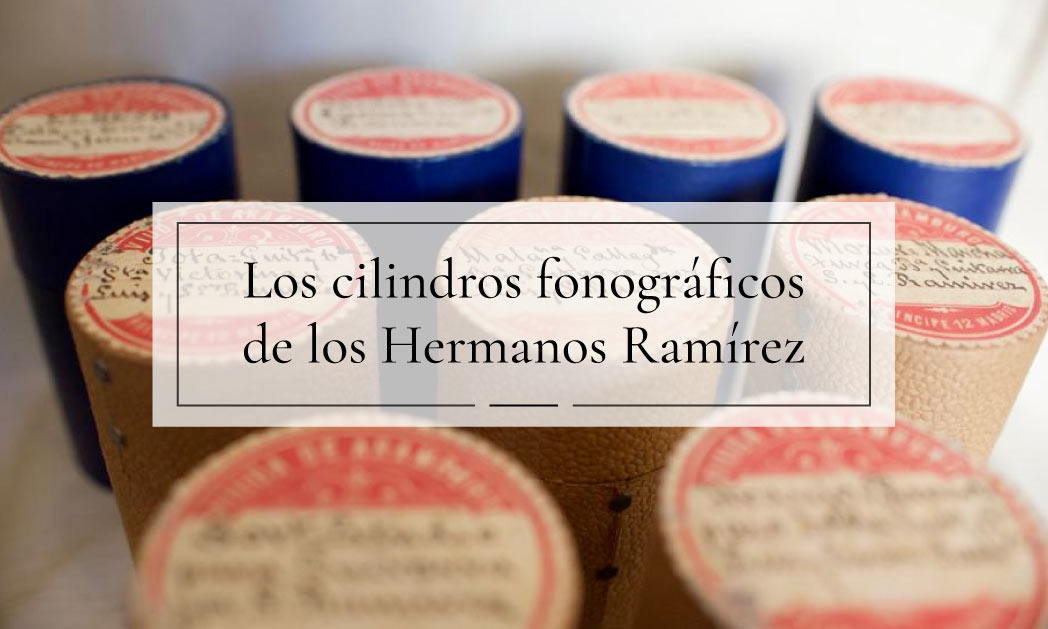 At the end of the 19th century, Luis and Simón Ramírez printed a series of phonographic cylinders with the guitar and the bandurria as protagonists.

Of José Simón Ramírez de Galarreta y Pernías ‘José Ramírez II‘ (1885-1957) and Luis Ramírez de Galarreta y Pernías ‘Luis Ramírez’ (18XX-19XX), we have little information beyond that provided by the Ramírez family. When he was barely twenty years old, José Simón Ramírez went on a tour of South America – overcoming the reluctance of his father (José Ramírez I) – with the argument that it would be a brief two-year trip, although it ended up being twenty. Among the many activities he carried out, his work as commercial director of His Master’s Voice in Argentina (La Voz de su Amo) stood out.

In 1923 his father died, so he returned to Madrid from Buenos Aires to take over the family business, after acquiring the shares of his brother Luis and his two sisters. Luis Ramírez continued his artistic career, playing with Los Alpinos and with the Trío Español, together with Miguel Martínez’s father (whose name was Jesús Martínez), the historical manager of the shop located at number two Concepción Jerónima Street.

The phonograph in Spain

The life of the phonograph in Spain is one of the most exciting periods in our musical history. Since Edison succeeded in 1877 in developing the first prototype of the tinfoil phonograph, our country was an important place, both for the activity developed and for the quality of what was produced. From 1884 onwards, this primitive tin foil began to be replaced by the wax cylinder as a recording medium, but it was not until almost a decade later that the new recording format began to spread throughout Spain, through public exhibitions held by Pertierra, Armando Hugens and the Marquis of Tovar, among others.

Prominent professionals and amateurs impressed cylinders to the delight of the audiences that gathered in salons, casinos and other types of venues. But until that time, however, there had not yet been any commercial houses dedicated to the recording and marketing of cylinders, with a catalog of their productions and an establishment available to the amateur. It was at the zenith of the 19th century when several entrepreneurs who were very much in touch with the latest scientific advances began to take the first steps in this direction, as was the case of the aforementioned Armando Hugens or the laboratory of Viuda de Aramburo.

The Ramirez Brothers begin their curiosity for the phonograph

It was between 1898 and 1899 when the “Hermanos Ramírez” (Luis Ramírez and Simón Ramírez), with a mixture of curiosity and love for the instrument, experimented with the phonograph and impressed the following cylinders:

To do so, they used an Edison Standard Model A “Square top” phonograph with Bettini membrane -both recorder and player- and speakers from the same manufacturer, undoubtedly the most exclusive combination for this type of recording. The cylinders used came from the aforementioned establishment of Viuda de Aramburo, where the latest inventions in the scientific field were exhibited and marketed, as the labels accompanying the documents state. These cylinders, either blank (unrecorded) or commercially available after shaving (cleaned for re-recording), were the medium chosen to record the heterogeneous guitar repertoire of the end of the century.

The location twenty years ago of these documents and their incorporation into the Carlos Martín Ballester Collection was quite an event, as it is, for the moment, the earliest collection of sound documents related to the concert guitar in the world. If we add to this the close links of the Ramírez brothers with the world of the guitar and its construction, the collection acquires even greater relevance.